FARGO fans will surely appreciate this 57-second clip. In a nutshell, this is what my site is all about — how to handle information that doesn’t look or sound right, is inconsistent, too coincidental and so on. If you just put the politics aside and look at something objectively — it’s AMAZING what you can see.

America has gone totally off the rails in its worship of the wildly undeserving — a line I wrote 4 years ago.

While I voted for Obama in 2008, I knew he wasn’t an agent of change — and said so at the time. The reason I knew that is because he had no history of risk (not of the boldness it would take to give D.C. a good kick in the ass). But I gave the guy a shot — and wished him the best in the same way I do for all who assume the office:

I hope he’ll be the greatest president ever!

My vote went to Romney in 2012. I just have this old-fashioned idea about not rewarding people who are dishonest and don’t do a good job.

Hannity and O’Reilly were spot-on about a lot during the Obama years. That I can’t stand the likes of those guys is precisely to the point — because if someone’s making sense, I don’t care who they are.

Is that enough for my bona fides for fair-mindedness?

Just how far does one have to go to lay the foundation for impartiality?

That was the question I continually faced when I wrote my documentary.

We must be clear-sighted in beginnings, for, as in their budding we discern not the danger, so in their full growth we perceive not the remedy.

(from In Retrospect: The Tragedy and Lessons of Vietnam by  Robert McNamara, Secretary of Defense JFK/LBJ Administrations)

That nuclear scientist I interviewed — he’s not “an” authority on the issue — he’s THE authority (the one even the best experts in the world go to for the final word). It would be unthinkable not to talk to him if you really wanted to know the truth.

The second you shun something that doesn’t fit the narrative you want — you have contaminated your perception.

I’m sure many of you found it maddening when the Left played the race card to discard your criticism. Well I didn’t appreciate being called a “Bush hater” for going after the truth that nails both parties to the wall.

Defenders of the Indefensible invariably ignore #2 and #3 and distort the hell out of #1:

That you even think that something so complex and convoluted could be explained away so easily — is a monumental problem all by itself . . .

Does this sound like an arsenal of chemical weapons from an active WMD program to you?

The administration had its hands on 60,000 tubes — and yet not one of them was presented by Powell at the U.N. According to HUBRIS, they scrapped the idea of displaying a tube — since Powell would be holding up the one piece of evidence that was most in dispute.

As David Albright put it in a combined quote from Spinning the Tubes and HUBRIS:

If you want to stir up a war, then nuclear’s always the flagship. Everybody in the Middle East has chemical or biological weapons, and they’re not decisive. And so it’s really always the difference between some concern and a lot of concern.

The tubes were everything for the administration’s case. They were something tangible that they could point to. Without it, they had nothing!”

“Everybody believed Iraq had W.M.D.” is not a valid argument any more than “armed only with skittles.”

Such fragments of folly are nothing more than empty slogans to serve a narrative. Arguing your views in good faith demands discernment — the willingness to examine all factors — instead of seizing on one-dimensional elements for inadequate conclusions.

Citing outdated and generic claims from Democrats is an emotional response to outright reject opposing arguments in a wholesale manner. That is the epitome of spin — to engineer an illusion — to make you believe that something meaningless has substance.

How can we possibly solve serious problems when we refuse to adhere to some semblance of the fundamentals of making sense?

And instead of the media helping to sort things out — their highly-selective interest in the truth prevents the possibility of rational discourse.

I intertwine the Trayvon story with the Iraq WMD delusion — an echo chamber of timeless deceit by Democrats and Republicans alike. The Iraq WMD debacle is one of the most manipulated, convoluted, and costly stories in history — and my documentary is the only source that brings crystal-clear clarity to it all (and no — I’m not exaggerating).

On the nuclear claim, I dismantle Colin Powell’s UN speech unlike anything ever seen before. But in a society that systematically derails reason, evidence alone cannot penetrate such depths of duplicity — so I take an artistic approach to deliver facts in the face of delusion. The Trayvon element is the hook into the documentary — putting up a mirror to mankind’s perpetual hypocrisy. On all-things Iraq, conservatives were in lockstep — just like liberals were for Trayvon Martin.

The psychological maneuvering of bunk-ridden beliefs is far and away the biggest barrier to a better world. We need a tectonic shift in critical thinking skills — and to do that we need to start looking at the root of problems instead of spinning our wheels on the symptoms.

We live in a country capable of magnificence — and yet we’re throwing it all away by wallowing in a cesspool of servility.

Teddy would be appalled:

The President is merely the most important among a large number of public servants. He should be supported or opposed exactly to the degree which is warranted by his good conduct or bad conduct, his efficiency or inefficiency in rendering loyal, able, and disinterested service to the Nation as a whole.

To announce that there must be no criticism of the President, or that we are to stand by the President, right or wrong, is not only unpatriotic and servile, but is morally treasonable to the American public. Nothing but the truth should be spoken about him or anyone else. But it is even more important to tell the truth, pleasant or unpleasant, about him than about anyone else.

Being true to your word is more involved than simply telling the truth. More so than ever, people feel free to believe whatever they want and still see themselves as honest.

As a real-life character in the documentary essentially put it with pride: “It’s not a lie if I believe it’s true.”

All the more reason why intellectual honesty is far more demanding than honesty itself. The former requires the curiosity to question, a willingness to reflect, the welcoming of criticism, the acceptance of correction, and an objective interest in the truth — whereas with the latter you can be satisfied in your perception alone.

Undeniably, the exponential increase in self-righteous certainty is tied to technology. Instead of becoming more worldly with our exceptional tools — our conveniences are eroding our ability to think things through. In our brave new world, we seem to thrive on being dismissive, distracted, distant, and shortsighted. After all — who has time to be thoughtful anymore?

With a complicit media feeding an increasingly incurious audience, flagrant dishonesty will forever reign. It’s time to do something about that.

From Prologue to Epilogue, my 7-part series shines a light on what we have become:

Note #1: The animations are almost all original. The importance of that point is that you have to be an authority on the subject matter in order to write this material. The only exceptions are the Uranium Enrichment Primer and the animations that illustrate the entire cycle from Uranium Milling to Yellowcake to UF6 Conversion to Uranium Enrichment (all of which were modified by my magician of a videographer Shane Killian).

Note #2: Clicking on postcard below will take you to the Welcome page of the website — which explains a little background behind how all this started. Each segment is under the View Documentary menu (as well as a sub-menu for Transcripts).

Note #3: You can also get to each segment by the links below the postcard. Each one was painstakingly designed to build on each other, so the sequence is critical to understanding how it all ties together. Nevertheless, if you wish to watch the promo-clip excerpts first, then feel free to do so by clicking on playlist video that follows the links. 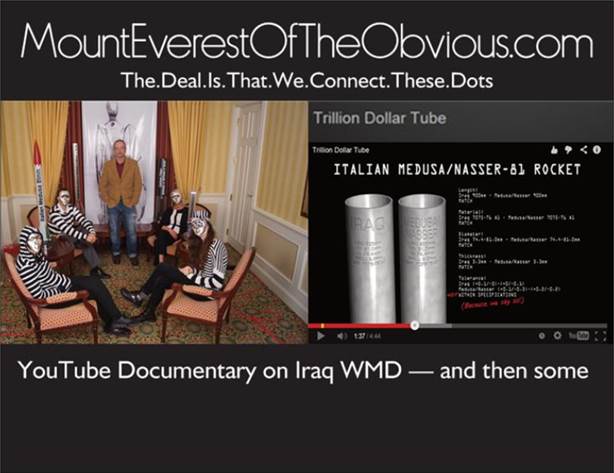 Below is a YouTube playlist of the 4 promo-clip excerpts.

Playlist of promos is comprised of the clips below. Clicking on the image will take you to YouTube playlist where you can play them individually if you like.