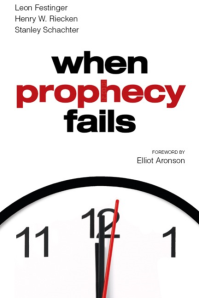 A belief must be held with deep conviction and it must have some relevance to action, that is, to what the believer does or how he behaves.

The person holding the belief must have committed himself to it; that is, for the sake of his belief, he must have taken some important action that is difficult to undo. In general, the more important such actions are, and the more difficult they are to undo, the greater is the individual’s commitment to the belief.

The belief must be sufficiently specific and sufficiently concerned with the real world so that events may unequivocally refute the belief.

Such undeniable disconfirmatory evidence must occur and must be recognized by the individual holding the belief.

The first two of these conditions specify the circumstances that will make the belief resistant to change. The third and fourth conditions together, on the other hand, point to factors that would exert powerful pressure on a believer to discard his belief. It is, of course, possible that an individual, even though deeply convinced of a belief, may discard it in the face of unequivocal disconfirmation. We must, therefore, state a fifth condition specifying the circumstances under which the belief will be discarded and those under which it will be maintained with new fervor.

The individual believer must have social support. It is unlikely that one isolated believer could withstand the kind of disconfirming evidence we have specified. If, however, the believer is a member of a group of convinced persons who can support one another, we would expect the belief to be maintained and the believers to attempt to proselyte or to persuade nonmembers that the belief is correct.